I was invited by the Ministry of Agriculture of Quebec to participate in their inaugural Quebec media tours.  Whenever I have the chance to go to Montreal I take it and that is precisely where we were headed for the tour!  As I’ve mentioned, it’s one of my favourite cities as I’ve said many times before on here – Check out my post Montreal, je t’aime and another recipe inspired by Montreal Pizza with Mortadella and Pistachio Pesto.
I travelled to Montreal using Via Rail.  I haven’t taken the train in years so I thought it was a good time to try it out again.  I sat in Via One and I really enjoyed it.  Although it’s a long train ride, it’s definitely cheaper than flying and more enjoyable than driving.

I stayed at the trendy boutique hotel Hôtel Place d’Armes for the first time and it was just as amazing as I have heard from others who have stayed there.  The service was wonderful and the rooms are beautiful, clean and very quiet.

Our first stop of the tour was the Crew Collective Café.  This historical building used to house the Royal Bank Headquarters and is located in Old Montreal.  Now, the café moved in but the layout and décor remains the same, cubicles and all!  It’s a great spot to have meetings or work solo – the cubicles are private and quiet.

Next, we headed on a guided tour to uncover some of the city’s little gems.  Long time Montrealer, Danny of Spade and Palacio, showed us his side of the city, Jean Talon market and beyond!

We stopped at Brasserie Harricana for lunch.  I absolutely LOVED the décor in this restaurant.  It was very retro with lots of marble, rich woods, mid-century furniture and lighting.  The food was great too but the beer and cheese pairings far surpassed the regular menu in my opinion – such a great selection here!  They have a buffet option for lunch, which is pretty unique but I’m not sure it’s being received well.

Next, we began the Agricultural and environmental focused business spots.  Our first stop was Loop Juices who rescues produce discarded between the farm and the supermarket to produce juices and then send its residual pulp to a company that turns it into fabulous dog treats.

Next, we visited an urban mushroom farm, Blanc de gris, who uses discarded coffee grounds and spent wheat from restaurants and breweries to grow its amazing oyster mushrooms.

It was a special treat to head to dinner to celebrate ITHQ 50th anniversary this year.  We joined them for an exclusive five course dinner. Each course was created by a different chef, all graduates from ITHQ.

The next day started off deliciously!  We all headed to a Chocolate tasting workshop at Chocolats Geneviève Grandbois in the Mile-End district. I have already tried their chocolate before and I am a huge fan.  It was great to do an official tasting where they explained to us the flavour profiles of their special chocolate.

We were then treated to a VIP tour of the recently renovated hotel Fairmont Queen Elizabeth and its Artisans market, the first local market located in a hotel in Canada. Mario Paladin, the Director of this great market, curated the best of the best food products and chefs.  Outfitted with wood burning pizza ovens, an all-glass, open specialty bakery and sweets area, rotisserie chicken and vegetables, cured meats and cheeses and so much more.  We wanted to try a bit of everything so we got one board of each specialty and it was all really delicious.  Whomever lives or works around this market is truly lucky!

We headed downtown to a Cider and maple tasting festival.  It was here that I was introduced to Michel Jodoin wonderful apple cider and apple vermouth.  I was intrigued by the vermouth because it is one of those fortified wines that is making a comeback.  I was inspired by it so I ordered some from their website and created this cocktail recipe.  It’s a little bit bitter, sweet and refreshingly bubbly!

Save Print
Author: Julie
Ingredients
Instructions
Wordpress Recipe Plugin by EasyRecipe
3.4.3177
Next we visited the Festival MONTRÉAL EN LUMIÈRE where I think we all experienced sensory overload.  I was enamoured by all of the light installations and they were interactive as well which made it really fun! 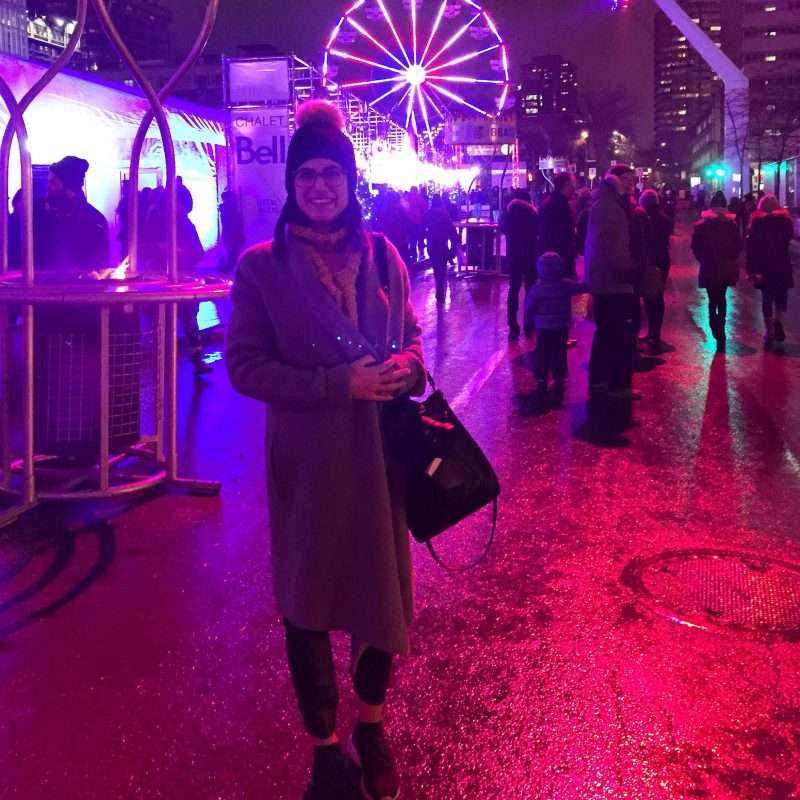 We had dinner at Blumenthal, a Montreal modern brewery that serves fresh and locally grown products.  I had a really delicious dish, pictured above, and we had a great view of the light festival grounds while we dined.
After dinner, took a VIP tour of the festival site and explored the Maple Syrup booths.  We sampled their treats all made from Maple Syrup – the Maple frothed milk was my favourite (it had a big chunk of maple caramel on top!)
It was a jam-packed tour and I was really tired by the end of it but I had six hours to myself on the train ride home (which is a lot more than I ever get while at home!)
With Love,
Julie
*Thank you to Agriculture Quebec for inviting me on this wonderful tour and treating me to the most delicious few days!  All opinions, as always, are my own.