(Article Photography By: George Pimentel)
Three years have gone by since I first met Chef Claudio Aprile on the set of MasterChef Canada Season One.  I always admired his passion for creativity and for inspiring others in the kitchen.  He has had many prosperous ventures in his run as a restauranteur thus far, such as Colborne Lane, Origin, and Origin North.  His career began under the mentorship of rock star Chef Mark McEwan so it’s no doubt that Chef Claudio has built a successful and creative story for himself that has taken him to present day Copetin, his latest creation. Co-pe-tin:  A name suggested by his mother that means “to drop in” or can be used as a noun to mean an aperitif, a social atmosphere, a community, and of course, Chef Claudio’s latest culinary venture. I rolled up to Copetin, located at the eclectic and lively corner of King and Church in Toronto, with my minivan-like vehicle and I was greeted by the valet parking attendants.  Of course this was completely unexpected for me as this mother of two doesn’t spend much time at fancy parties.  I discreetly changed out of my flip flops and into my “classy-girl” heels.  I was then whisked away by a host who led me to the red carpet while making sure I was covered by their umbrella.  I could totally get used to this kind of service.  I then had my picture taken on the red carpet and joined my friends inside. I quietly smiled as I perused his restaurant and noticed all of the little touches that told Chef Claudio’s story and reflected his deep personal connection to his restaurant.  An example of this is there is an entire wall of Chef Claudio’s hand-chosen record collection – Chef Claudio is inspired by music and art – and it made for a beautiful wall feature too.  This area is considered the bar-area, with raised tabletops to offer a perfect vantage point so you can people-watch like nobody’s business, as well as a semi-private dining room. Each section of the restaurant has its own menu which is so fun because every time you come to the restaurant, you can have a new and different delicious experience.  The dining room is where I spent most of the evening – there is something about an exposed brick wall that I’m drawn to — it immediately gives off that cool urban vibe.  The last and final stop is the kitchen counter for six which will feature Chef Claudio’s inventive tasting menus.  I have to get on the wait list for that!


I couldn’t write an entire article about Copetin without talking about the food!  Copetin serves “inventive, elevated Canadian cuisine informed by the diverse food personalities of Toronto’s ethnic neighbourhoods”.  I love this concept — It means that each and every dish at Copetin tells a story of one of the many beautiful ethnicities that make up our beautiful city. 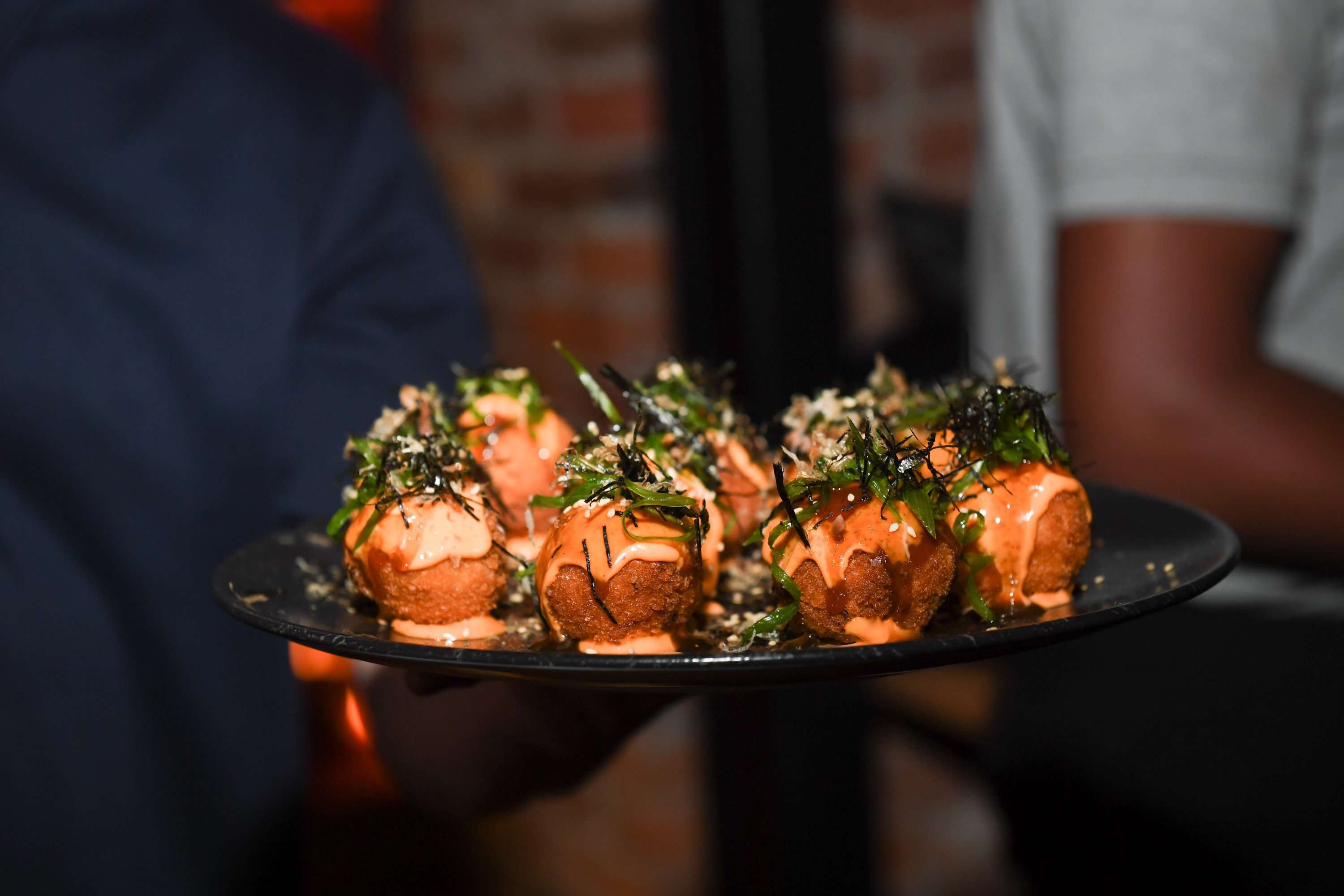 Every bite was absolutely delicious.  This was a bit of a sensory overload for me – taking in the new and beautiful space while trying each amazing bite and washing it down with the wildly unique cocktails.  I am going to let the photos of the food speak for themselves.  I feel like the food should be experienced and interpreted for oneself, anyway.

I spent most of the evening inside – there were so many friends there that I haven’t seen in ages, so the conversations kept going and going.  I took a walk-through the restaurant again and realized that there was a whole other party happening on the patio.  It was raining earlier but the skies seemed to have cleared and the sun came out just for this special occasion.  The patio is the perfect size, not too small where you will never get a seat on it ever but just the right size to feel special and exclusive. I joined some friends on the patio and spent the rest of my night enjoying a glass of wine on the patio and was enamoured by the outdoor kitchen and bar space that gave this space a life of its own.  The patio has Canada’s only customized ‘Botanist Bar’.  It has a built-in herb garden where patrons hand-pick their seasonings to add to cocktails composed of Chef Claudio’s original sous-vide fruit infusions and The Botanist dry gin distilled in Islay with 22 foraged island botanicals.  The sous vide machines were displayed adjacent to the exposed brick wall in the main dining area and added to the eclectic décor of the space – a great conversation piece! I was honoured to be invited to his Grand Opening and to be a part of this incredibly exciting part of his career.  After all the commotion of the evening, I reflected on the evening during my car ride home (I live almost an hour outside the City so this is where I do most of my internal de-briefing).  I realized that I should not have expected anything less from my incredibly humble and warm-hearted friend, Chef Claudio.  He didn’t put on this production to create buzz for his own self-fulfillment, he wanted every single person who came to his Grand Opening and beginning of his new journey to feel special and he fully achieved just that.
With Love,
Julie