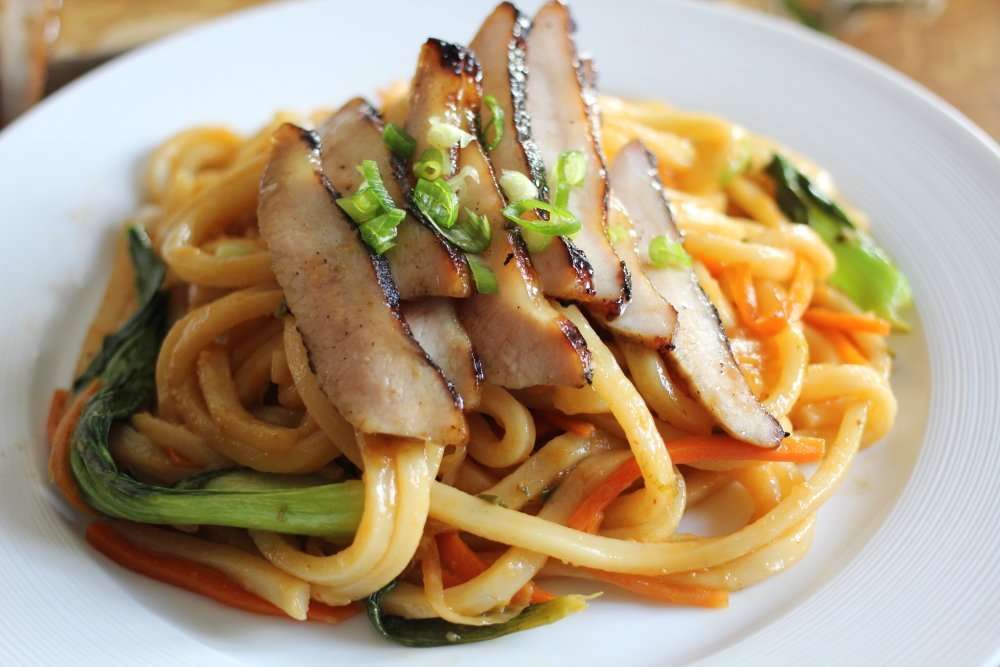 Now that we’re nearing the end of summer, you’re probably searching for something different to throw on the grill. This barbecue char siu using LiberTerre pork jowl (also known as pork cheeks) is the perfect option. If you’ve never cooked with pork jowl before, you’re totally missing out!  It’s a great option since it is nicely marbled with enough fat so it won’t dry out on the grill, and it is a versatile cut that goes great with summer sides!  I’ve added it on a saute of fresh udon noodles (because they’re my absolute favourite!)  Here is also a recipe for spicy udon noodles, which goes perfectly with the barbecued char siu.  A simple blanched bok choy with steamed rice is also a great option with this barbecued meat. Marinating the pork overnight, and a careful watch and consistent basting on the grill and you’ll end up with the best barbecued pork that you just can’t stop eating! Be adventurous and give this recipe a try — You will be happy you did!
With Love,
Julie

Save Print
pork jowl is a great option for your next barbecue. This recipe transforms this often overlooked cut of meat into a succulent and addicting barbecue favourite!
Author: Julie
Serves: 6
Ingredients
Instructions
Wordpress Recipe Plugin by EasyRecipe
3.4.3177
Spicy Udon Noodle Stir-fry

Save Print
Author: Julie
Serves: 4
Ingredients
Instructions
Wordpress Recipe Plugin by EasyRecipe
3.4.3177
*This recipe and post was created as part of a paid partnership between myself and LiberTerre.  However, and as always, all opinions are my own.

Save this one for meal-prep Sunday! Sausage-Stuffe

Just Me and my besties doing some stupid shiz on #

Can we talk MEATBALLS for a second? This is anoth